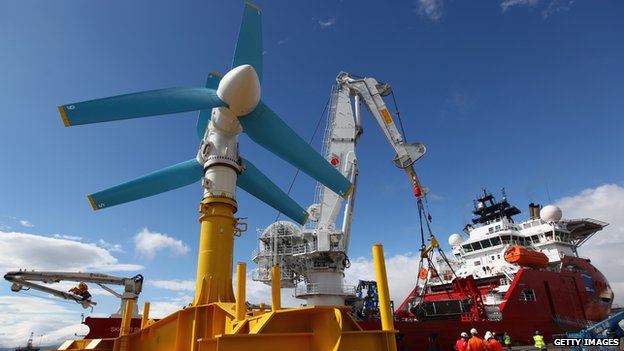 One of the world’s biggest tidal energy turbines being prepared for deployment in Scotland.
A Royal Society report says we’re underestimating the amount of electricity that could be generated from tidal sources, says Matt McGrathBBC Environment correspondent.

In summary – 15% of UK needs could be met from barrages that exploit tidal flow and 5% from planting turbines underwater in fast flowing tidal streams. The report’s co-author, Dr Nicholas Yates of the National Oceanography Centre, says:

I think it’s unfortunate that attention for tidal range has tended to focus on the Severn, it’s the wrong place to start, it’s too big,” he said. “Start small, it’s what the Danes did with wind – start small, learn quick and build up.”.

According to the authors of the latest research:

. . . 2013 could see a big breakthrough in tidal stream power. A company called MeyGen is planning to deploy tidal stream technology in the Pentland Firth that will initially generate up to 40MW of electricity, enough to power about 38,000 homes.

This is a crucial milestone for us, it will be the first array of tidal stream turbines,” observed report co-author Professor AbuBakr Bahaj from the University of Southampton.

It will be a viable proposition for us in energetic areas of the sea – it will be give us another element in the energy mix that’s more reliable than wind.”

In the past month, the EU has announced funding in the region of £30m for two UK tidal projects.

Investors in tidal technology are currently rewarded with a payment of £40 per megawatt hour for energy generated from renewables, but this scheme will end in 2017.

According to Prof Bahaj, this could have serious implications for the nascent industry. “It depends on the subsidy. Without it, it wouldn’t stack up financially.” Authors Tempted to Switch to Self-Publishing

Self-Publishing Tips: From Manuscript to Kindle
Scroll to top